The Stardust network affords me the opportunity to pursue challenging, innovative, and meaningful research, whilst simultaneously providing me with the chance to build a professional network and develop a variety of skills that are essential to early-stage researchers. Working at Dinamica Srl, I have been involved in exciting, new research on space debris risk mitigation. 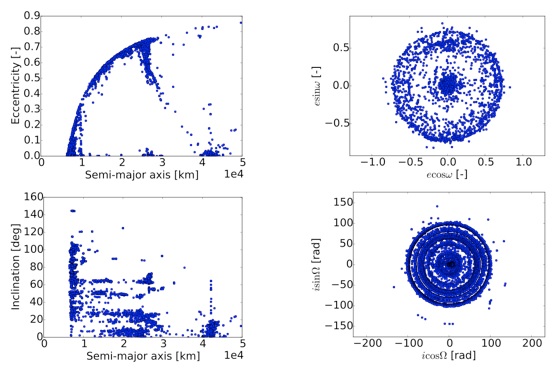 Space debris, commonly referred to as space junk, is a growing problem that requires in-depth research to develop means to mitigate risks posed to valuable space assets, and to safeguard life on Earth. Figure 1 illustrates the distribution of space debris in space, in terms of the classical (Keplerian) orbital elements, highlighting the fact that the population is large, clustered and varied.

Across the world, efforts are underway to develop the necessary understanding and technologies to tackle this threat. These efforts include: 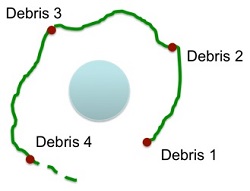 Figure 2: A schematic representation of a multi-target trajectory for an ADR mission concept 2. Development of a mission concept to remove hazardous, expended rocket bodies. One of the main classes of space debris objects is expended upper stages of launchers. I am currently leading the development of a mission concept called Agora (Active Grabbing and Orbital Removal of Ariane; see Figure 3 for mission patch) to target Ariane rocket bodies for removal. As part of this project, we are employing a novel technique to detumble an Ariane rocket body and to capture it with a robotic manipulator. My main technical contribution to the project is to develop the Guidance, Navigation & Control (GNC) architecture, to ensure that Agora can approach and engage a target rocket body in a safe and controlled manner. 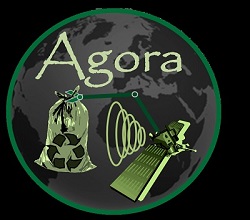 I would like to see this research play a role in the formulation of a real ADR mission by the end of the decade. The European Space Agency (ESA) has shown the intent to tackle the threat posed by large space debris objects through the Clean Space initiative. I firmly believe that research on space debris risk mitigation must not remain an academic exercise, but rather should lay the foundation for mission development in the near future. As a personal goal, I would like to continue this line of research and look forward to future opportunities to help tackle the space debris problem.

Kartik is an aerospace engineer and planetary scientist with degrees from Delft University of Technology in the Netherlands. He is currently co-founder and CEO at satsearch, a European Space Agency startup that is working on democratizing access to the global commercial space market.